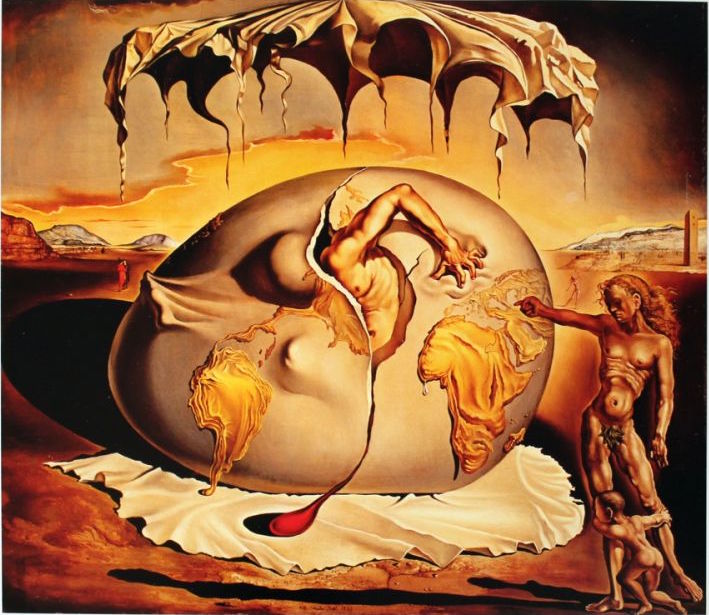 Painted in 1943, this particular painting is the one that drew me to Salvador Dali. The first time I experienced it was in an art book in middle school. At the time, it not only helped spark my imagination, but in a way it also helped rekindle my love for art in general. It was radically different from the traditional and somewhat boring art that I was accustomed to till that point. In class, for the most part, the main focus was primarily on things like portraits, still life's, and landscapes but this piece was completely different, it seemed like a fantasy world. A sort of dream world, another dimension where Dali was the creator and instead of trying to just imitate the world as he saw it, he distorted it, shaped it, and molded it into his own with the simple use of a paint brush, a canvas and pure imagination. That not only fascinated me, but it truly showed me that art can be much more than reality. That was my first time experiencing something like this other than maybe cartoons and video games but the difference with cartoons and video games is that they’re very linear in regards to interpretation. They didn’t allow for too much critical thinking as far as story was concerned, for the most part, you’re pretty much forced fed all the information. Whereas Dali’s paintings and especially this one in particular, was full of enigma. It left me baffled, asking for more, asking why, wondering what was his thought process, what was going through his mind, and wondering if there was any meaning to it all to begin with. This inspiring work still baffles me till this day, even after reading more about it. Initially I thought that it somehow symbolized courage. That the tall figure pointing at the egg was helping the child overcome it’s fears, sort of like a coming of age. A very simplistic interpretation on my behalf but when you go to thedali.org the explanation offered is much more complex. Now keep in mind that this painting was produced after WWII. It explains that the ''Geopoliticus Child reflects the newfound importance America held for the world and for Dali. The man breaking from the egg emerges out of the “new” nation, America, signaling a global transformation. Africa and South America are both enlarged, representing the growing importance of the Third World, while Europe is being crushed by the man’s hand, indicating its diminishing importance as an international power. The draped cloth above and below the egg represents the “placenta” of the new nation which, as Dali shows with a drop of blood, can only be born through much pain and suffering. An androgynous older figure stands in the foreground and points to the emerging man, acknowledging the birth of this global transformation. The cowering child with its long shadow – the “Geopoliticus Child” of the title – represents this new age.’’
Truly fascinating even after you read about it, but I believe that one should not get into the habit of getting explanations before truly experiencing the artwork for what it is. Explanations can sometime ruin the experience and take away some of the magic. I find it much more rewarding to first come up with your own interpretation and then compare it with others. That way it gives your imagination the chance to run wild. At least for a little bit. Hmmm come to think of it, I probably should’ve put a spoiler alert at the top of the post. Haha...